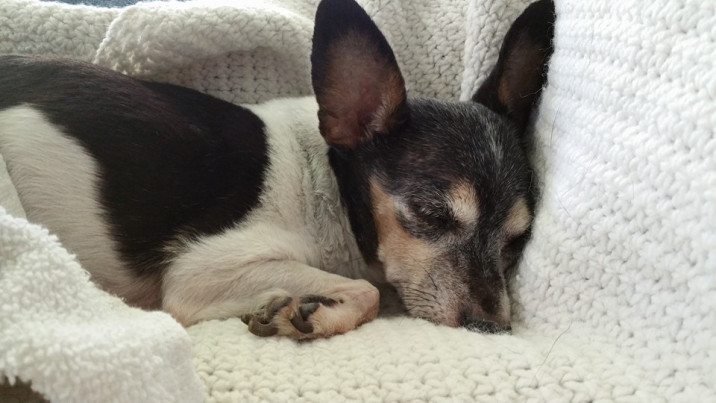 About, oh, a week or so ago, I asked Dan if he was cool with us being pet foster parents.

At least I like to think I asked for his input. I might have made him feel like he didn’t really have much choice in the matter, even if that wasn’t actually my intention.

Fortunately, he and I are on the same page when it comes to pets. We love animals, and he knows I am especially soft when it comes to senior dogs and cats. That’s the short version of how we came to be fosters for Hospice Hearts, and how we ended up welcoming Mizzy (pictured above) into our home.

Our cat wasn’t particularly enthusiastic that we let a thirteen-year-old rat terrier join our ranks. She smelled the newcomer suspiciously and hissed at her. Our dog, however, was adorably smitten with the tiny creature, guiding her around the house,  running to her aid at any sign of distress, and checking on her constantly.

Truth be told, until Tuesday when Mizzy arrived, I wouldn’t have described myself as a lap dog type of person. My experience with small breeds mostly involved shoelace chewing, nonstop frenetic play, and incessantly shrill yipping. But Mizzy, she was different. She was old. She was sweet. She was quiet.

Hospice Hearts didn’t have much information about her, either. All we really knew was that her owner had entered a nursing home and the owner’s family had surrendered her to a shelter. Mizzy was hard of hearing and mostly blind due to cataracts. She was missing several teeth, and—bless her tiny, punkin heart—had the breath of a dragon with gingivitis.

She was small and frightened. In an unfamiliar house with weird smells, the only way to keep Mizzy from shaking was to hold her and pet her. So that’s just what I did. We bonded in the first ten seconds. She sighed a tired puppy sigh, and fell asleep in my lap. She slept beside me in bed.

The first 24 hours went smoothly enough, but on the second night Mizzy had a seizure at 2 a.m. Then over the course of the next 12 hours, she had three more. We made arrangements to get her to the vet, and as we were about to place her in the pet carrier, she had another.

Even Dan was surprised how hard I took the news. I mean, our goal in being fosters wasn’t to keep her, you know? We were working under the assumption that we would provide her with some TLC until she went to a new forever home. But when she needed more from me, I gave it. And she instantly went from being my house guest to being my sweet little Mizzy.

I cried so hard I couldn’t really talk. My face got snotty. And when I was so dehydrated I didn’t have any tears left, I started sucking in air with a quivery lip. Like a toddler in the throes of a tantrum.

“Are you sure you’re cut out for this fostering thing?” Dan asked me, concerned.

“Yes!” I answered, a little defensively. “That Mizzy died so soon after she entered foster care was just one of those things. It was unpredictable. It won’t end this way every time.”

Hospice Hearts is an all-volunteer rescue based in Champaign-Urbana, serving senior cats and dogs whose owners are no longer able to care for them due to nursing home admission, serious illness, or death. Support Hospice hearts on GoFundMe.