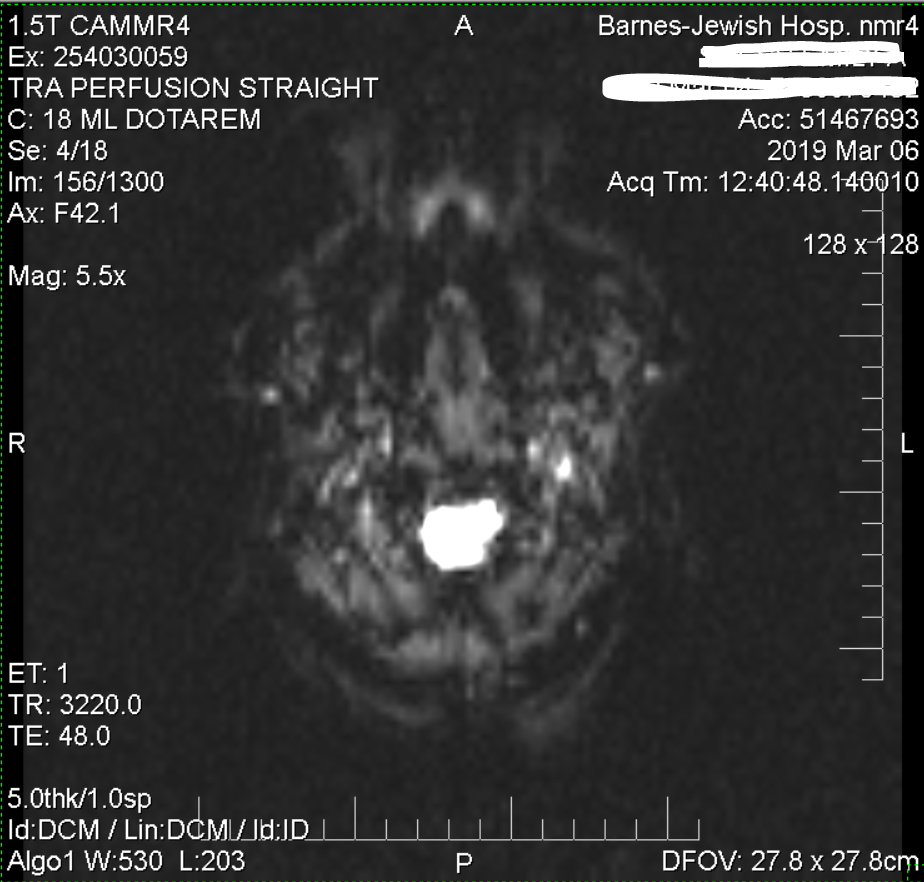 A few days ago, a friend asked me if I had any pictures from the MRIs of my brain tumor. (I’ll talk about why in another post.)

Funny she should ask. I explained to her that even though I was 2 years post-diagnosis, I still had never seen inside my head. I’d read the radiologists’ medical reports explaining what the MRIs showed, but I had never looked at the actual pictures.

I didn’t intentionally avoid the images in the beginning. It’s just that I got whisked from test to test as soon as I was admitted to Barnes-Jewish hospital. (This was in 2017.) I had multiple MRIs, X-rays, CT scans, a PET scan, a spinal tap, and then ultimately a six-hour brain surgery, and all that time I was never in a room with my doctor and the imaging results at the same time. Besides that, I was constantly being bombarded with needles for new IVs, Heparin shots, or this one last thing they wanted to double check. And so in the early days there just wasn’t room in my schedule to think about the images that had proven my 2+ years of misery were literally all in my head (not figuratively all in my head, like a few jerkwad doctors had previously assumed).

When things calmed down after radiation treatments, I did think about those MRIs on occasion. Once during a weekly visit with Dr. Huang, my radiation oncologist. Dan viewed and discussed the pictures with one of the oncology residents, but it was an impromptu consult in the hallway and I missed it because I was peeing in a cup a couple of doors down. When I emerged from the facilities carrying a warm plastic cup, Dad told me how he had just seen my brain moments earlier. “Really? Where?” I asked.

But I was beyond tired. Asking a doctor about them at that point would have meant delaying how soon I could get back to Mom & Dad’s and rest. I’d already had my fill of buzzing fluorescent lights and the nauseating smell of Purell hand sanitizing foam, so I performed a few physical feats for the doctor (similar to a field sobriety test, if you’re curious) and begged Dan to wheel me home.

After that, the more I thought about looking at my tumor and those oddly glowing images, the less I wanted to see them. It freaked me out, and so I said, “Hey, self. You don’t have to look at that shit if you don’t want to.” And I replied to myself, “Good. I don’t want to.”

But now here I am, a couple of years later. I’ve managed to put a little bit of distance between me and the traumas of diagnosis and treatment. So when Tina asked about my MRIs, I was thinking, “Yeah, I should totally look at those things now. My next scan is just days away. It’s perfect timing.” So after yesterday’s scan at Siteman, I asked what I needed to do to get copies of my images.

“Oh, it’s really easy,” the NP explained. “You just go to the film library on the second floor and they’ll burn you a CD while you wait. You’ll walk out with your records in a matter of minutes.”

There are more than 2,600 images on the disk, but here is one. I didn’t consult with the doc on them, so there aren’t a lot of questions I can answer, but I do invite you all to say hello to that glowy thing toward the center of the top-down slices. Looking at it isn’t as scary as I imagined it would be. My eye holes are way creepier than the tumor, don’t you think?

Support this site with a one-time donation: PayPal.me/EmilySuess