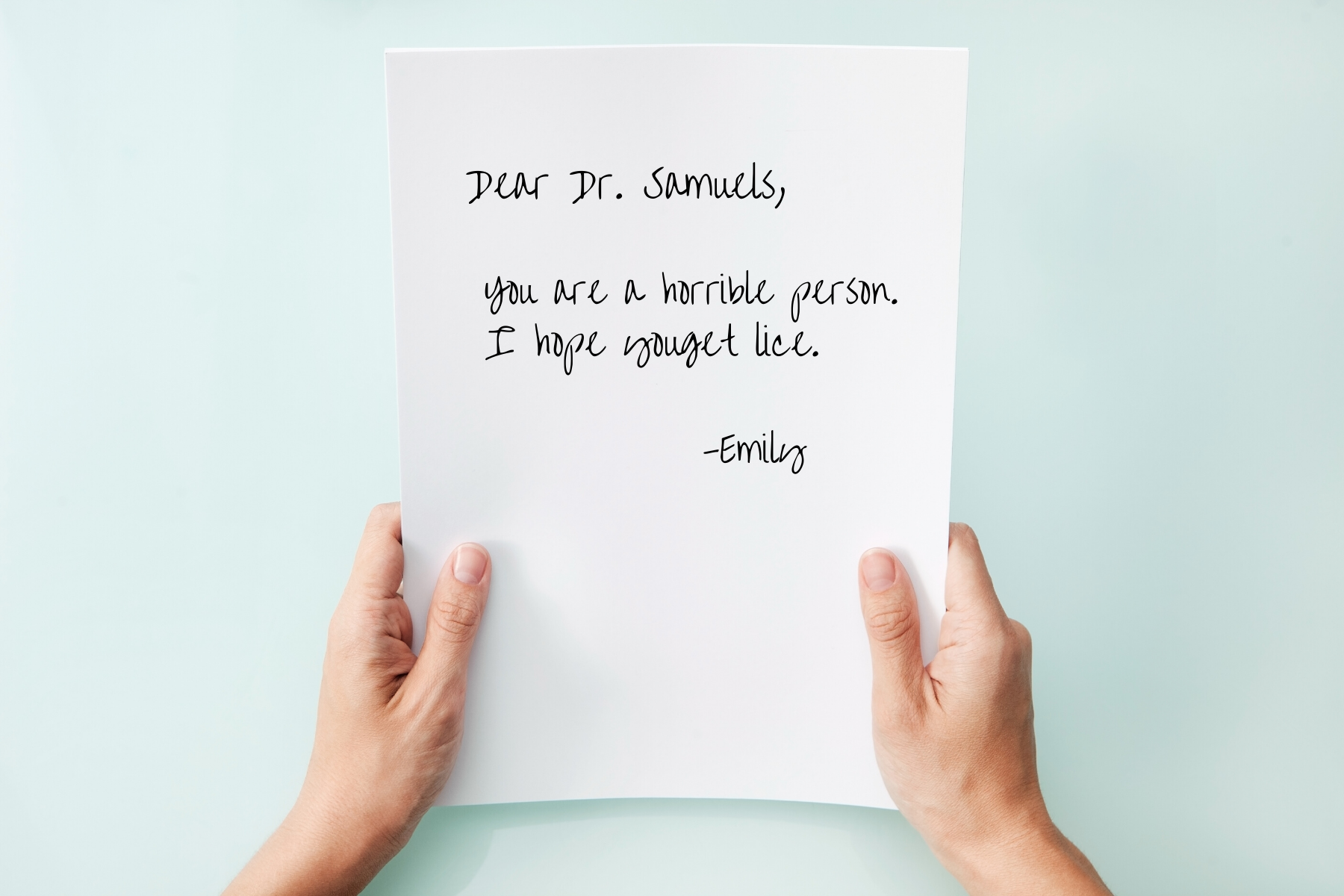 First, a pre-emptive apology to any Dr. Brian Samuels who is not the same Dr. Samuels who recently made my life a total fucking nightmare. I wasn’t given any contact information or license number and I have no better way of directing this correspondence or clarifying its intended recipient other than to say that I’m writing this to the guy who gets paid by Lincoln Financial Group (LFG) to say it’s okay if they cancel my long-term disability claim.

My name is Emily Suess, and while you might recognize the name because it’s a relatively unusual one, you won’t be able to match it to a face. That’s because you’ve never met me. We’ve never exchanged emails, Skyped, talked on the phone, or been in close enough proximity that I could throw a used tampon at you. (Okay, full disclosure, I couldn’t throw a used tampon at you anyway because chemotherapy forced me into early menopause and dried up my uterus. I haven’t had a period in well over a year now. But you’d know that if you’d ever interviewed me or completed a full physical examination.)

The point is, we’ve never met at all. Despite that, though, you came to some really specific conclusions about me that stripped me of about $900 a month in disability income that I desperately need to pay for such frivolities as food and shelter for me and my also-disabled husband.

While I’d like to be able to scoop out my cancerous brain tumor with a grapefruit spoon and drop it into whatever you’re eating for breakfast this morning, I’ll have to settle for giving you a piece of my mind this way instead. Publicly. On the internet. Because that’s the only option I have. You can blame yourself for that.

Last night while unable to sleep due to things like GERD, the sensation that an elephant was sitting on my chest, and the constant, pulsing rage-whoosh in my right ear, I couldn’t help but wonder, Do doctors really give an oath to ‘do no harm’ or is that just something that’s played up on TV to romanticize the profession? Because this is the second goddamn time in my life I’ve had to do something like this to get a doctor to wake the fuck up.

My first open letter was written to my rheumatologist’s employer circa 2014. Boy was that guy a jerk. He always talked over me, outright dismissing my concerns that his fibromyalgia and depression diagnoses needed a little fine-tuning. He also ignored a couple of pretty significant symptoms—chronic muscle weakness and numbness in my extremities—presumably because they just didn’t really work for him.  That arrogant fucking prick just couldn’t fucking be bothered to consider whether he’d made an error in his initial diagnosis, and as a result a cancerous mass on my brain stem was left to grow, unchecked, for another two years. You’ve probably seen the pictures.

Anyway, I hobbled out of his office one day in a rage, not knowing what was wrong but trusting fully that he wasn’t going to be the one to figure it out. Unfortunately, his lazy-ass diagnosis followed me to every other doctor I tried to see for the next several months. At one doctor’s office I was even denied an appointment despite having a referral because—and I quote—“the doctor doesn’t see fibro patients.”

The rheumatologists, cardiologists, nurse practitioners, internists, physical therapists, gastroenterologists, and neurologists that would take my co-pays all saw a fat, 30-something woman sitting in front of them, noted fibro on her chart, and shrugged indifferently.

On more than one office visit I was reduced to uncontrollably sobbing on the exam room table because I was: 1.) in constant, relentless pain and presumed to be lying about it to get pain pills; 2.) shitting myself three or four times a week because it took me so long to walk from my couch to the bathroom; and 3.) routinely being berated for not participating in a prescribed regular exercise routine which I was physically incapable of performing.

It wasn’t until I feebly begged my primary physician in the presence of my husband to please, for the love of God, rule out multiple sclerosis that she performed a more thorough physical examination. That exam revealed clonus and led to me finally getting the first MRI of my life.

Immediately after my primary physician broke the news to me that I had a brain tumor, my husband wheeled me down the clinic hallway to check out. “I told them I was sick!” I laughed.

Later, I would think to myself, Jesus, what a sick fucking reaction to have to my own brain tumor diagnosis. But I’ve had a couple of years to reflect on these events, and I realize now that I hadn’t yet processed the tumor part of things in that moment. I was just reveling in an overwhelming sense of relief that I could finally shove an MRI in the face of the next dismissive motherfucker in a white coat who tried to gaslight me.

How naive of me.

Just in case you don’t keep track of the lives you unwittingly destroy, let me give you a quick rundown of the things that you’ve said about me that are, in fact, complete bullshit:

It’s my understanding from the letter sent by LFG that you based these nonsense claims exclusively on records obtained from my oncologist’s and primary physician’s offices. The picture you have of my present health condition is woefully incomplete, and if you had bothered to check with the person most intimately familiar with my medical history, ME, you would fucking know this too.

Unfortunately for me, you’re just arrogant enough to think you’re qualified to make this kind of life-altering decision for a stranger without first gathering all the facts and/or just presumptuous enough to trust that a handful of doctor’s office documents not only contain enough information to develop an informed opinion on the matter but that said documents are free of errors and omissions.

First, let me discuss the documents provided by my primary physician’s office dated 2/3/2017. I will assume they are factually accurate, though I have not yet seen for myself what they sent LFG.

Next up, what you need to know about the information and documentation provided by my oncologist’s office:

Now back to the giant, gaping flaw in this process that no one seems to give two shits about but me: my involvement in this clusterfuck of a disability determination. The only interview I gave in relation to LFG’s decision to cancel my long-term disability claim—the only primary knowledge any of you assholes has—is similarly incomplete.

To begin with, you need to understand that the stigma of chronic illness and disability make me reticent to talk with anyone about how bad things truly are. I am just barely comfortable detailing the particulars of my disability with doctors with whom I have established an actual rapport.

So when an insurance company employee with no medical training says to me over the phone, “tell me about your disability,” I immediately panic because I know the consequences of fucking up are huge, and I know she’s just waiting for me to say something that gets her employer off the hook for fulfilling the terms in the LTD policy I paid for.

Just like all the other stuff you’ve based your decision on, I can’t verify that she understood me or that she relayed information to you and LFG accurately, because I’ve never seen her report.

I also can’t even fucking remember what I ate for breakfast yesterday because my short-term memory is shit. Whether that’s a result of the brain tumor, elevated stress, emotional trauma, having my brain zapped with radiation or wrecked by chemotherapy, or any possible combination of those things, I can’t say for sure.

What I can say is that if you were a responsible, compassionate doctor, you wouldn’t agree to be a part of this sham process. You wouldn’t recklessly make such an important decision that deprives two people of their safety and security without, at bare minimum, sending me an email and asking if there’s anything else you should know. You would insist that such an important decision be made carefully and with as much thoughtful consideration as you’d choose a cancer treatment for someone sitting right in front of you. Because financial security is a fundamental component of every patient’s health.

You and every other doctor in the world need to internalize that one simple truth, especially if you’re going to expand your occupational duties to include shit like protecting an insurance company’s bottom line. Because when you do that at the expense of patients like me, you are causing direct harm.

Last night after reading LFG’s letter I couldn’t sleep and things felt so hopeless for me that I was slipping into a really dark place. And not for the first time in my life. With a BP of 141/95 and a resting pulse of 130, instinctively I knew that I couldn’t let myself continue down that path or bad things could happen. So my fight-or-flight response brought me to this safer, if more profane, headspace where I hate you. Hating you is how I survive because it distracts me from an overwhelming and dark reality that there are doctors who don’t care enough whether I have a roof over my head or food in my cupboards to even ask me how things are going.

I’m not mad that you are wrong about me. I am mad that you didn’t even try to be right when so much is at stake.

Thanks to you, Dr. Samuels, I now have to fight an appeals battle in addition to my daily fight against brain cancer. May this letter bring you the same gastrointestinal disturbances I am experiencing right now. I hope that you have no recourse but to be a better person and a better fucking doctor to make it stop.

Fuck you from the bottom of my tachycardic heart,

UPDATE: After requesting a license number from Lincoln Financial Group, I can confirm this is the guy.