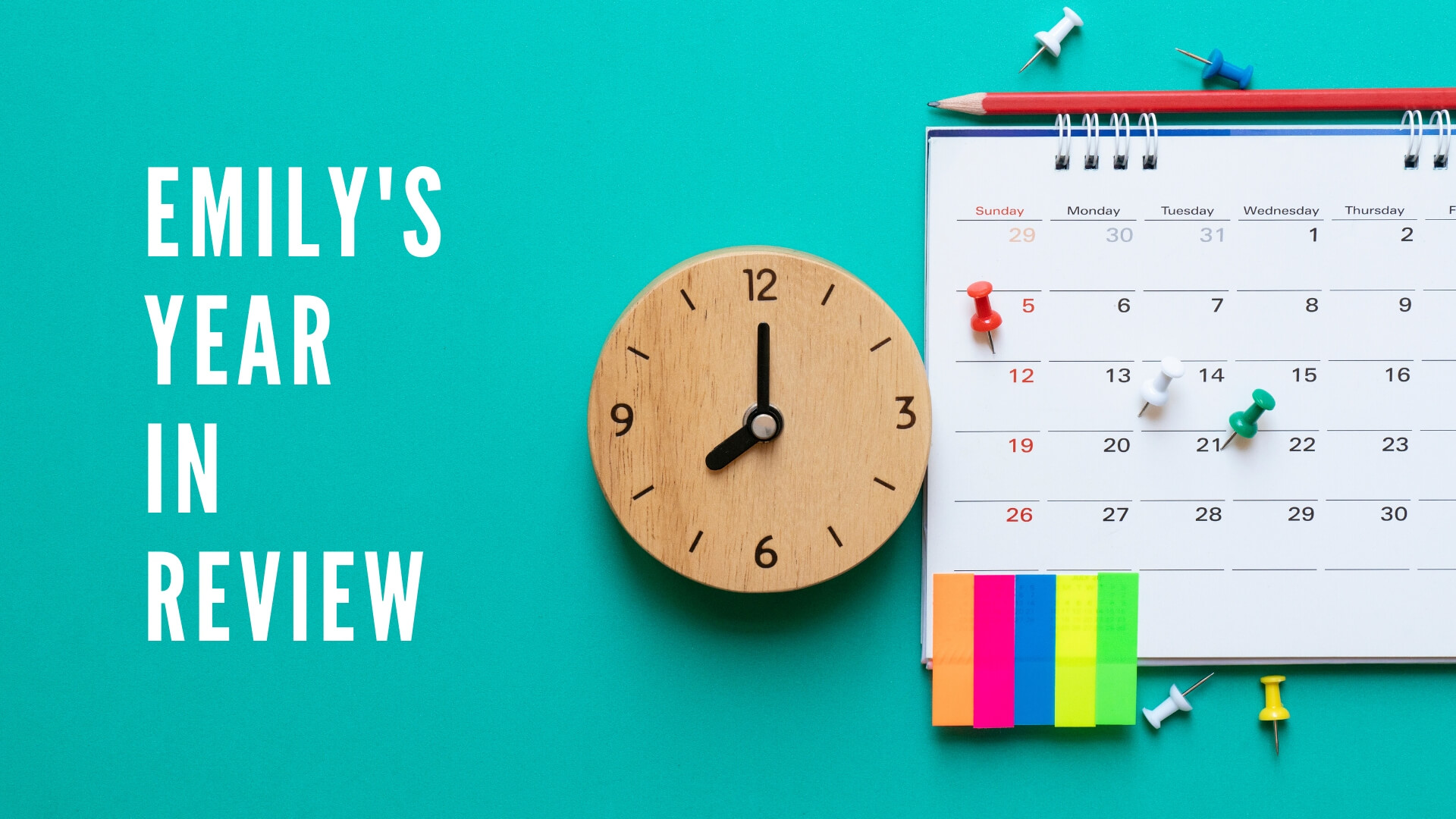 Normally at the end of December, I like to do a year-end post featuring all the books I’ve read. But I’m almost ashamed to admit I only read one book from start to finish this year—The Inexplicable Universe: Unsolved Mysteries by Neil deGrasse Tyson. And, if I’m being 100% genuine here, I don’t even remember it because I listened to it on Audible to help me fall asleep. (Listening to astrophysicists explain space shit makes cancer seem really, really small.)

I’m probably boring you. Sorry. I guess what I’m trying to do here is explain why this 2019 Year in Review Post doesn’t feature a bunch of book recommendations and what I’ve decided to do instead: compile a list of my own blog posts—one from each month—for something like a highlight reel.

Oh, gawd. I just realized this is going to be the blog version of a clip show. I hated those sitcom episodes. They were always listed as new in TV Guide, but they just felt like someone was trying to put lipstick on a rerun.

Whatever, I’m almost 200 words into this thing now. Let’s just do it.

My Kind of Art Therapy

Bright colors help me cope—with gray winter days, with cancer, with the seemingly endless barrage of bad news that comes with being a politically aware adult these days. I love filling a page with color, and I love using alcohol-based markers to do it. By the way, if you’re looking to buy your own set, the Bianyos are more affordable and look every bit as lovely as the more expensive Prismacolors. (I know that Copics are supposed to be THE best, but ain’t nobody got money for that.)

I didn’t write much in February, but I did manage to post several Zentangle videos. (I tend to cycle through hobbies, focusing on one very intently for weeks or months and then taking a giant step back to re-energize.) Despite being a total YouTube noob, my channel grew from nothing to more than 470 subscribers in 2019. Wow! I’m looking forward to creating more videos in 2020. I received new art supplies for Christmas, and I’m itching to use them.

Who You Gonna Believe: Preface

Desperate to make ends meet after a financial blow, I took a huge leap of faith and started publishing my memoir this year. I am so thankful for the Patrons helping me keep this project going, because if my only option was to publish traditionally, it would never have seen the light of day. Not because I wouldn’t love to see it in print, but because cancer has stripped me of the massive amounts of energy it would require to query agents or self-publish the entire tome at once.

March gets two entries, because Lincoln Financial Group’s decision to cancel my disability benefits was fucking devastating and the driving factor for my setting up a Patreon. Looking back on this open letter to their hired shill, Dr. Brian Samuels, I feel like I was too kind. What do you think?

Naturally, I fought back. And a huge part of my response to Lincoln Financial’s thievery was to simply talk about it. When I learned just how far they would go to keep me from successfully appealing their bogus decision—and then discovered how many others they’ve hurt doing the same thing—I figured the best way to punch back was show everyone what’s behind the curtain.

I was depressed for most of May. The only thing I wrote was Chapter 2 of my memoir. In it, I recount one of the many times Rodney tried to bury my self-confidence, which ultimately led to me missing a Brandi Carlile concert out of pure spite. I regret that I missed the show. I do not regret having a Rodney-free evening.

We Survived The Urbana Tornado ICYWW

This summer severe storms (one a legit tornado) took out the giant maple tree in our backyard, ripped the weatherhead off our roof, and started an electrical fire at the utility pole near our shed, prompting me to call 911 for the first time ever in my life. For the rest of the summer, I was a little jumpy every time the wind picked up.

I’m in the News Again

I kept after Lincoln Financial Group—because what choice did I have?—and in July Philadelphia Weekly published a piece about my story. (Both Lincoln Financial Group and Dr. Hartner are based in Pennsylvania.) There’s no way to know for sure if it had an impact, but I do remember seeing that LFG posted a third quarter loss to shareholders. Maybe that’s partly because potential customers decided to go elsewhere.

I wrote two posts in August that weren’t memoir chapters, and both were related to the ongoing ordeal with Lincoln Financial Group. One was an open letter (I wrote a lot of open letters this year) to Dr. Hartner’s colleagues at Penn Medicine. Site stats showed me that a lot of people using Penn Medicine’s internet read the letter, but not one doctor was brave enough to say publicly or privately that whoring for an insurance company was a bad look for the profession, let alone a conflict of interest. Which of course makes me think they’re all in on it.

Still Waiting on Those MRI Results

Not surprisingly, I fell into a pretty significant depression. Well, it was more like I was pushed into a sinkhole of depression, and I didn’t blog or tweet much for a while. It concerned some people, which is never my intention. So I mustered enough energy to let everyone know it wasn’t because I had received more bad news.

In October I wrote once just to keep everyone informed. I mentioned why I had been avoiding Twitter and explained that because I couldn’t renew my WordPress.com subscription, I wasn’t really feeling excited about blogging. Then the most beautiful thing happened. People chipped in to help me keep the blog going. And not only that, but you all donated enough for me to move to a self-hosted site—THIS self-hosted site. And I love it. I’ve never been this happy with a version of my website before. I freaking love it. Did I say I love it? And I love you guys. Thank you so much.

My narcissist ex-husband “Rodney” tried to insert himself into my life again last month, 11 years after a pretty shitty divorce. I dealt with his cyber harassment this time the same way I did in 2012—when he tried to use my website to advance his career and his employer—by writing the truth until the compulsive liar in him slithers away.

I tried a writing prompt for the first time in, like, ever this month. I usually prefer reading fiction to writing it, but the exercise got me out of the doldrums for a little bit and helped me flex some writing muscles that I don’t have an opportunity to use very often. One thing that 2019 has made abundantly clear to me is that I need to do more fun stuff simply because it’s fun.

And there you have it, my 2019 year in review. Thanks to all of you for following along with me this year. For cheering me up when things get dark. And for having my back when things get ugly. I’m looking forward to  hanging out with you in 2020. I’ve got fun things planned for us on my YouTube channel, in The Rabbit Hole newsletter, and with a brand new project. Stay tuned! 🙂