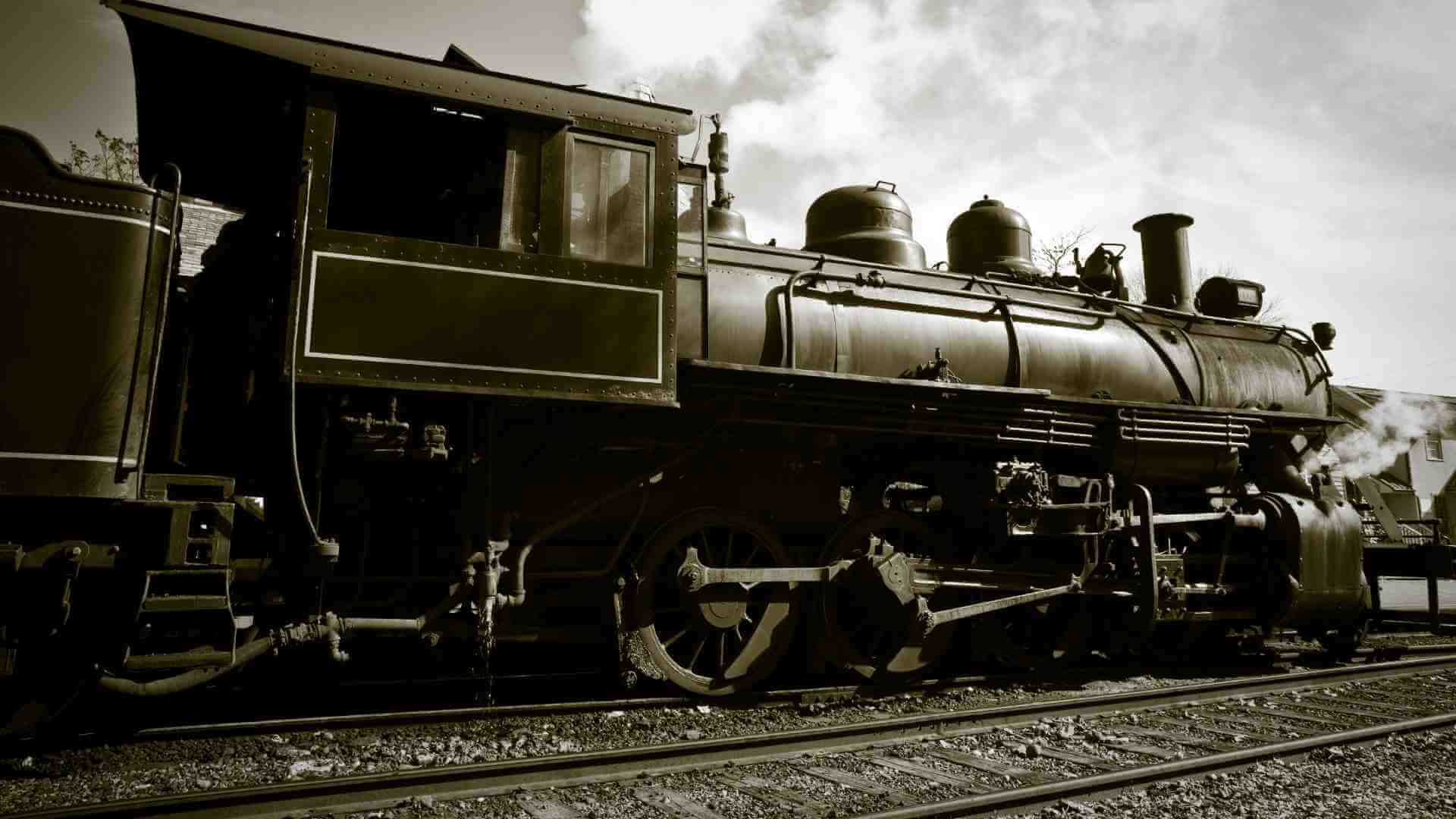 There’s a white man in a dark suit. He’s immaculately dressed, wearing the finest silk tie, a matching pocket square, and hand-tooled wingtips. In one hand he holds a pipe, and in the other hand a pocketwatch.

He’s resting in a fancy leather chair with feet propped on a matching ottoman. The chair and ottoman straddle the crossties of a railroad track.

At the train depot platform several feet from the track, a little boy holding his mother’s hand pulls her attention away from the arrival schedule she’s reading. The boy points to the man and asks, “Mommy, why is he on the railroad track?”

The boy’s concern causes his mother some alarm too. She feels uncomfortable as a picture of a the train pulling into the station crosses her mind. “The train is not due for another hour, Love,” she soothes her young son and herself too.

It’s true. The next train isn’t scheduled to arrive from the west for another 60 minutes, but the boy doesn’t really know what an hour feels like, so he walks to the edge of the platform and looks as far down the track as he can in both directions.

With no train in sight, he resumes his place by his mother’s side, fidgeting as children do. He pulls at a loose thread on his trousers, swings his legs exaggeratedly, pokes at a knot in the arm of the bench following swirls of wood grain with his index finger.

Fifteen minutes pass. It feels like an eternity has passed to the boy. “Mommy,” he tugs her shirt sleeve. “Is the train still coming? Why is the man on the track?”

The woman replies with great patience, “Let’s ask the conductor.”

“Mr. Conductor,” she calls him over. “My son would like to know why that man is on the railroad track. He looks very comfortable, doesn’t he?” She subtly signals her concern without making her son more anxious.

The conductor chuckles, “That’s Mr. Whitebeard. He’s been sitting on the track for several hours and nothing has happened.” Then he leans in and jovially explains to the boy, “See his fine suit and his pocketwatch? He must be very wise and we would be silly to worry about him.”

The boy leans closer to his mother, turning his body toward her but keeping his eyes fixed on the conductor.

Exhausted by the waiting, the boy briefly naps. He is eventually startled awake as the platform buzzes with activity. It’s now just ten minutes until the train arrives, and a crowd of non-passengers has gathered with the travelers—some to say hello to new arrivals and some to say goodbye to those about to depart.

Mr. Whitebeard is still sitting in his chair. The chair is still straddling the track.

The boy’s shout causes everyone at the station to notice the man on the track.

The ticket clerk whispers, “Seems a little foolhardy to be sitting on a train track like that right now.”

“You think?” a woman snaps in reply. She rushes to the edge of the platform and yells. “Hey, mister! The train will be here soon. You should move your chair off the track. If you need help, I will grab the ottoman, and my husband will help you with your chair!”

“No need for hysteria here,” Mr. Whitebeard dismisses her. “I’m in total control.”

“But the train is coming!” she shouts. She points down the track to the west where a small black dot emerges on the horizon.

Mr. Whitebeard glances at his watch, puffs on his pipe, and stands up. The woman sighs, relieved. Then Mr. Whitebeard turns his chair 180 degrees so it faces east, moves the ottoman in front of it, and sits back down.

“You’re a goddamn fool. Do you have a fucking death wish!?” the woman screams. The conductor approaches her and grabs her by the elbow. “Ma’am your language is unacceptable, and there are children present. I’m going to have to ask you to leave.”

Many people in the crowd tut-tut the woman as she is escorted out of the station by the conductor. A young preacher says a prayer for her to be delivered from the bonds of Satan. The woman yells, “I just want Mr. Whitebeard to live!”

A school teacher in the crowd expecting her aunt and uncle to arrive on the train soon clutches her necklace and says—to no one in particular—“Can you imagine being bold enough to attack Mr. Whitebeard like that? Just yesterday I saw her sitting in a chair on her own porch!”

The crowd divides itself as the train approaches, and Mr. Whitebeard casually blows smoke rings into the air. The people on the left half of the platform are shouting, “Get off the track! The train is coming! This is dangerous! You will die!”

The people on the right side of the platform are shouting, “The real danger is telling Mr. Whitebeard he doesn’t have the right to sit in his own chair. Last I checked, this was still a free train station.”

A befuddled group in the middle begins writing a speech about the dangers of sitting on railroad tracks and asks the ticket clerk if he would read it aloud when they finish, probably in time for tomorrow’s train to arrive.

Meanwhile, on the train…

“Mr. Whitebeard doesn’t think you can even drive a train,” the engineer whispers to Mr. Quinn, an apprentice standing beside him in the cab. Then he moves through all the passenger cars announcing, “Mr. Whitebeard doesn’t think Mr. Quinn should be able to drive this train.” He yells after his first proclamation is largely ignored and the passengers gaze out the window at the passing landscape. “You’ll never be able to travel again!”

Back at the station, the people on the right side of the platform are pulling knives on station employees. Amid the chaos, the depot’s clocksmith jumps down from his ladder and runs out to the track, knocking Mr. Whitebeard out of harms way at the last second. The chair and ottoman are destroyed. The conductor and the ticket clerk call the clocksmith a hero.

The following morning, Mr. Whitebeard buys a new chair just like the old chair and sets it back on the train track. The town newspaper reports that the train’s engineer knew Mr. Whitebeard would be on the track yesterday. He had a chance to pull the brakes, but instead handed the controls over to Mr. Whitebeard’s long-time and well-known nemesis, Mr. Quinn.

A town meeting is called. “We need to give every passenger on trains a parachute so this never happens again,” the conductor announces.

“That’s ridiculous,” the owner of the town’s bakery says. “We need to stop buying tickets that pay the engineer’s salary until his license is revoked.”

“Train passengers are not the enemy, here,” the conductor says smugly, as people line up to buy tickets for the next train.”

Did you enjoy this piece? You may also like my webserial memoir, Who You Gonna Believe. Read the first chapter free.