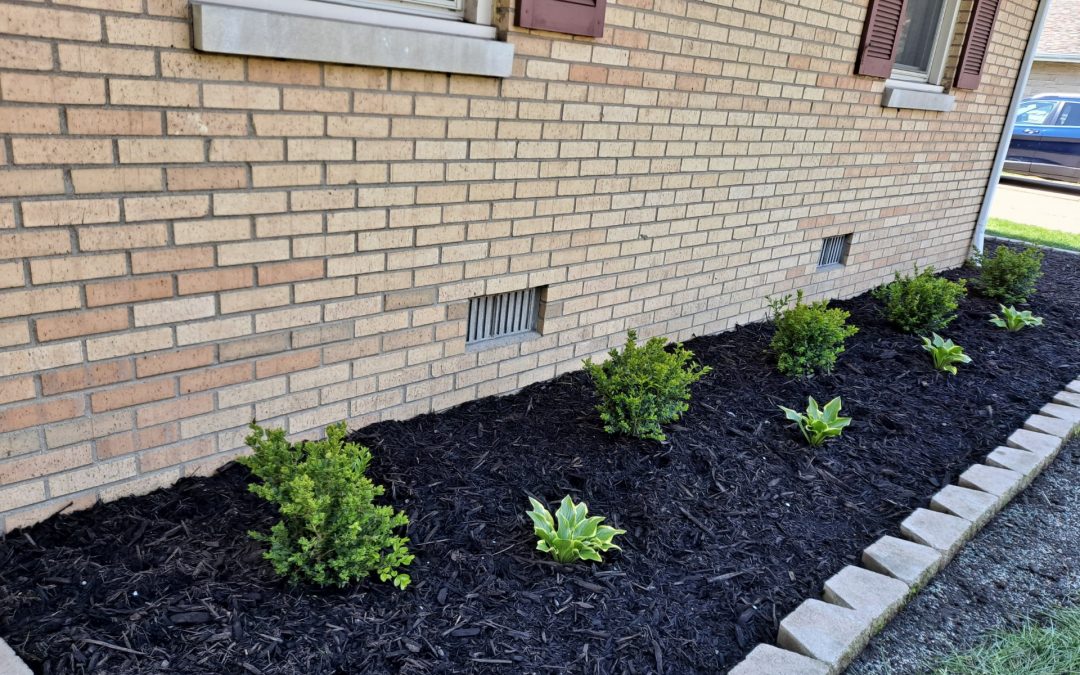 Before the brain cancer update, first things the first: Chapter 23 of Who You Gonna Believe is up for Patrons. Read it now.

The past couple of weeks have been eventful, just not so much in my online life. Mom came to our house here in Urbana to help us with landscaping. (And when I say helped, I pretty much mean she did everything because she is the best mom on the planet.)

There are plans in the works to get the shutters and trim on the house painted, but first: estimates. It really makes me happy to look at the prettied-up yard this year. Because last year during the pandemic, we didn’t have the money or motivation to do much of anything with the yard.

After Mom spent a few days here helping us out, I went back to stay with her for a bit. One of my brothers and I worked on getting more things sorted at her house. My Dad had a pretty ginormous model railroad thing going in the basement, so Ryan worked on that while mom sorted documents and I shredded the stuff that couldn’t be recycled.

It was hard work in that it tugged a lot of nostalgic strings, but it was good to get Mom several steps closer to a more manageable household. One evening she and I assembled a lateral file cabinet together. The instructions were terrible (there were no words, only pictures) but after two hours, we got it done and she made me a root beer float as a reward.

We also talked more about Dan and I moving to be closer to her and my brother and sister-in-law, and we are thinking the best idea might be to make a separate living space by finishing Mom’s basement. My brother the architect is willing to help us with plans. Also, because Mom’s place is only about 30 minutes from St. Louis, it would mean we’d be closer to Siteman Cancer Center if/when I need treatment again.

Speaking of the cancer stuff. I did have a consultation with a neuro-oncologist at Siteman last week, and the news actually brought me a little relief. The doctor said that it’s not clear whether the growth they’re seeing on my recent MRIs is cancer growth (if so, I’m a little ahead of schedule based on what they know about my kind of tumor) or if it’s radiation necrosis (if so, the timeline seems to fit).

At the moment, the only way to be certain is for them to biopsy the area they are seeing and look at the cells under a microscope. Having had one brain surgery already, I’m not really excited about the idea of another one. And because of the location (my medulla) doctors aren’t really eager to start digging around in there either. For now all the doctors involved in my case seem to be recommending another MRI in three months.

I think a huge factor in waiting is that I’m not experiencing new or worsening neurologic symptoms and the growth is small. With a little time it could become more obvious which treatment plan is needed, and in the meantime I can live my life knowing that there are treatments available for either scenario.

Anyway, I’m still a little uncertain when my next Zentangle video will be as I still have a lot of to-do’s that take priority. But I am feeling the itch to draw again and set up my bullet journal for May (I skipped April) so that I can keep things sorted a little better in my mind.

WELL FUUUUUUUUUUCK. It’s a couple of hours later, and I just heard that they want me to do low-dose chemotherapy again. I mean, it makes sense. I don’t disagree with their recommendation. But I was just starting to see some daylight after losing my dad, and now I’m preparing to be broke, fight insurance all over again, and just generally have no energy to even wipe my own ass.

Outbreaks and Breakouts: A Survivor's Log
Falling Out of Chairs is My New Superpower
My Mini Christmas Miracles: Meclizine and the Cran...
Lincoln Financial Group Denied Disability Benefits...