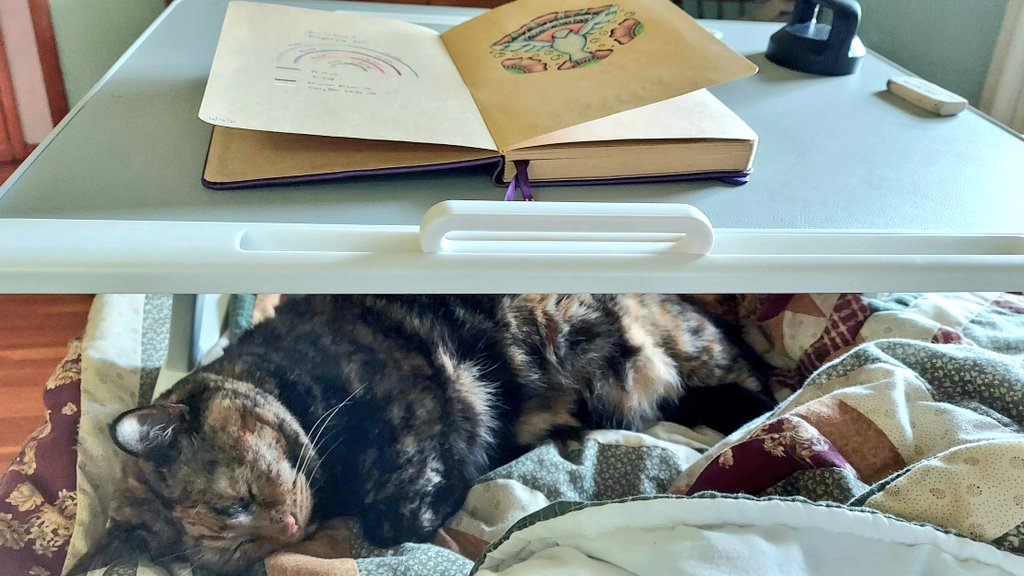 I usually shoot for Sunday to write these weekly updates, but it didn’t work out for Chemo Week 4 because, well, I didn’t feel like it. So here I am a day late and a dollar short, as my dad used to say. I’ve been thinking about him a lot lately. Partly because I miss him a lot and partly because he had cancer too several years ago and it’s hard to not think about and compare my experience to what I know about his.

Like, I was thinking how terrible it was that he had to go to work and started feeling pretty depressed before I realized that I am projecting my feelings about work onto him. A lot of the reasons I disliked jobs in the past had to do with sexism and crappy pay compared to my counterparts. When I realize he didn’t face those things, it comforts me a little. In a very twisted kind of way. He genuinely didn’t mind his job. But that is not at all where I intended to be going with this post.

Yesterday was Day 28 of chemo for me. It was a little depressing at first, but then it ended up being just another day on chemo. (Remember, I misunderstood my treatment in the beginning and thought I’d be done with chemo after 28 doses. Ha!)

I’m beginning my second of many, many 28-day cycles today. I got the shipment of temozolomide on Friday and I did a whole Twitter thread live-tweeting how I get all those pills ready for the month.

It’s actually a bit of an ordeal taking oral chemo. On the one hand, it’s nice to be at home and not at an infusion center during a pandemic. But on the other hand, I wonder if it’s easier having someone else administer treatment as opposed to feeding myself pills that make me miserable. It’s all awful, I know. But I have a lot of time to think about things I don’t want to think about, and then I end up tweeting or blogging about them.

I did have a little time to Zentangle this week, and every time I picked up the pen my strokes were a little more confident. I am currently working on another Tangled Yogi tutorial, because—as I’ve mentioned before, I think—I love colored pencil especially on the kraft paper in this journal. (I used four different Prismacolor pencils to get the green gems and flux pattern done here.)

If you’ve watched the Sindoo Flower tutorial or tried it yourself, you’ll see right away that this is not quite like her tangle. That’s because I got off track and had to improvise. Which is the whole point of Zentangle anyway, so I’m not getting down on myself. I’m just saying, it’s not what I intended when I set out, but I also don’t dislike what happened.

Deep, isn’t it? That’s kind of why I like Zentangle.

Speaking of. I found an Inktober 2021 Zentangle prompt list on Instagram while I was scrolling through my feed last night or the day before, and I think I want to give it a go. By some miracle, I made it through 2020 doing my own prompt list, which just feels so impossible this year. But maybe if I just use an existing prompt list and don’t try to do to much at once…

I don’t know. My favorite words lately are “we’ll see.”

I did manage to find the notebook I used for Inktober 2020, and had the brilliant idea to use it for this year. But I counted the pages I had left in it, and guess what? Only 30 blank ones left. Curses! I might just squeeze two prompts onto a single page. Or I might just tangle on a random tile or piece of paper. Stay tuned to find the answers to these and other very pressing questions.

Anyway, it’s dark and raining here today. The sound of the rain on the roof is pleasant but the change in weather also increases my everyday aches at the same time. Later this week it’s supposed to be like genuine fall weather–66 degrees or something. So I am trying to pump myself up for an outdoor walk. I’ve also already told Dan that he should plan on giving my hair a buzz. I like to keep it really short when life is hard–like using a number 1 guide kind of short, and I think I’m at about a number 3 at the moment.

When I got the laptop out today, I was happy to see there were comments on last week’s post waiting for me. I’m not the most timely in responding because I don’t get notifications for them, but I do appreciate when you guys take the time to leave a comment. I will get around to replying to them eventually!

Until next week, I’ll see you around the internet.