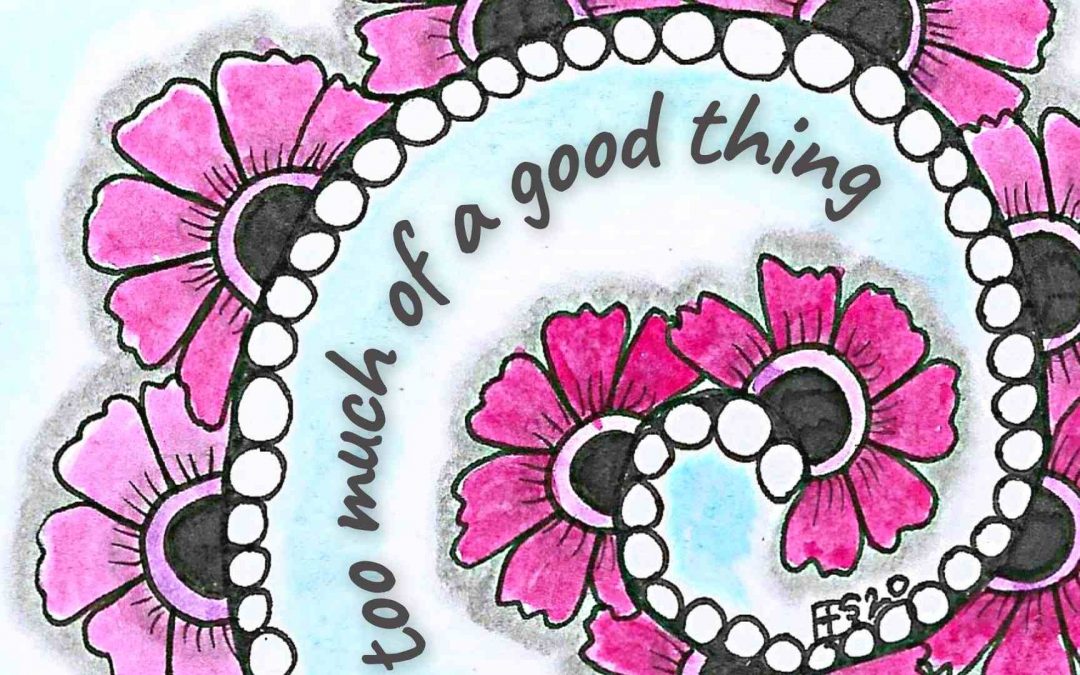 Too Much of a Good Thing

Too much of a good thing?

On Sundays, my phone tells me how much time I’ve used it compared to the previous week, and today it told me I used it 16 more hours.

That’s almost exactly how many hours’ worth of watercolor tutorials I’ve watched on YouTube in the last 48 hours.

I had that migraine, as I mentioned, and I was wrapping up another week of chemo. So I spent a lot of time in bed with my phone in the overhead articulating arm watching Sarah Cray’s video tutorials on the Let’s Make Art channel.

Guys? These tutorials feel so accessible. I want to paint all the things, and I’m trying to figure out how to subscribe to the boxes. They’re pretty reasonably priced, but I really need to give up $40 worth of something to be able to afford them.

This fixed income shit. I tell ya.

But also—and this is the real issue—I packed away all my other art supplies so I wouldn’t be tempted to make a huge mess that I don’t have the energy to clean up. I need more art stuff right now like I need more tumor cells.

I’m not being mean to myself, either. I’m genuinely trying to be kind to myself by not making life harder with moving on the horizon.

The 2D art class was a prerequisite for all other art classes. So naturally it conflicted with another class I also really wanted to take that was only offered at one time: fourth year German.

My counselor was like, “Well, I’ll put you in 3D art and see what happens.”

What happened was on the first day of 3D art, the art teacher asked us to raise our hands if we hadn’t taken 2D art. Like a damn honest fool, I raised mine.

“Please go to the office to change your schedule,” she said.

Why? Being inducted into the National Honors Society and getting some other embossed decal on my diploma required four years of a foreign language.

If I had it to do over, though. I’d have made a different decision. Those academic things got me nothing. I failed out of my first semester at the University of Evansville because I didn’t attend classes and I didn’t officially unenroll.

When I enrolled at IUPUI seven years later as a “non-traditional” student, admissions didn’t give a rats’ ass about my high school transcript or my UE transcript. In fact, I got a full-ride scholarship.

Which I don’t share to brag, because looking back I see some serious privilege, but I do share it for the young. To let them know life after high school is so incredibly hopeful, even if you feel like a screw up.

Where the heck was I going with this?

I really like art and I like adding color to my Zentangles and I like learning new things. And Let’s Make Art is not just like, here paint this. It’s more like, this is how you can achieve this look if you want.

…and by the way, here’s how to render 3D attributes on a 2D work

…and here’s some color theory

Anyway, some people have giant stacks of books to be read. My Dad had an entire basement full of model trains. I have coloring books and Zentangle tiles and sketchbooks and art supplies just waiting for me to have a good enough day.

Because joy. Because when it comes to art, I can’t have too much of this good thing. 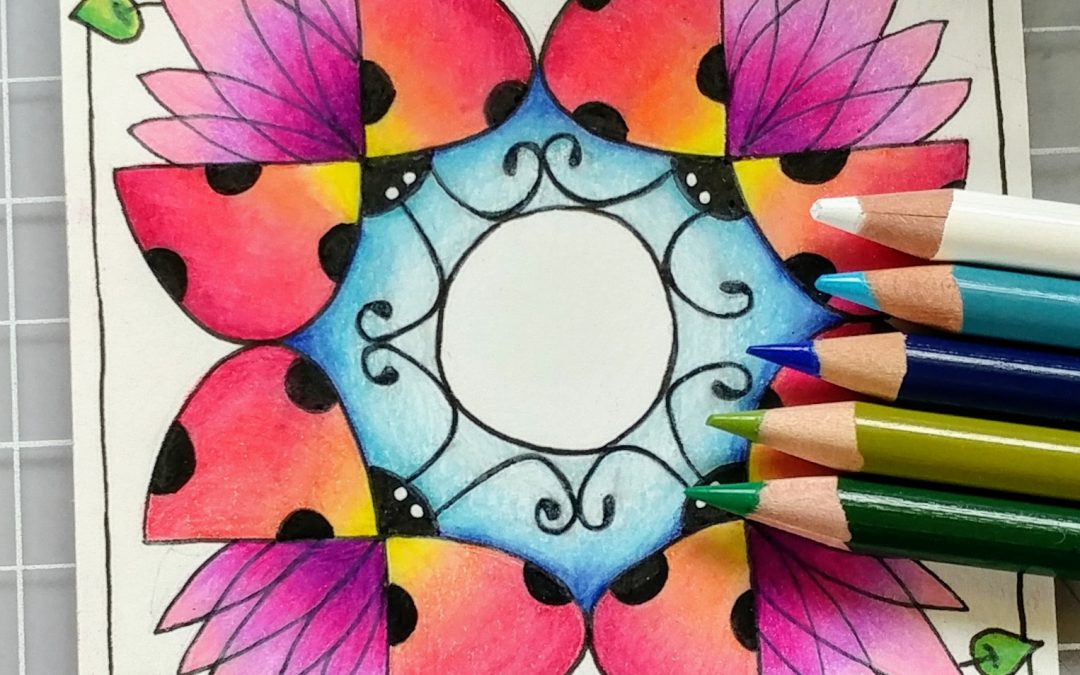 There’s a new video up on my channel: 9 Easy Zentangle Patterns for Beginners – Freeform Curves. I ran a poll asking my channel subscribers what interested them most, and an overwhelming majority said they wanted to learn how to draw more Zentangle patterns. (I’m not abandoning other video styles, just prioritizing accordingly.)

This past week, in an effort to distract myself from cancer thoughts (they’re like shower thoughts, but more disturbing) I decided to get out the Prismacolor Premier pencils again. My goal was to complete Tangled Yogi’s Ladybug Love Zentangle tutorial. She uses colored pencil in almost—if not all—of her video tutorials. I posted these process pics on Instagram and Twitter already, but I like looking at them, and, you know, this is my blog.

I never thought I’d be so enamored with colored pencils, but then I got good ones. And I started learning how to use them. Look at the intensity of that color, baby! I’ve also learned that quality paper helps. This tile is one I cut from some larger sheets of the same bristol vellum I used for the Riptide class.

I’m not sure what, if anything, we’ll get done around the house this week. We ordered new exterior shutters, but in addition to Dan and I both managing disabling health conditions (Oh yeah, insurance denied coverage of the medicine Dan’s doctor prescribed and then also denied the appeal. Good times.) removing the old shutters and attaching new ones just seems, like, hard?

We need a handyman. I hate that word, by the way, but am too tired to think of a better one right this second. I know there are all kinds of them around, but I am also too tired to do that level of vetting. I just want to automagically know this singular person who is like, “I will fix everything that needs fixing.” For me, vetting service people is an activity that ranks right up there with talking to customer service representatives and cleaning the litter box.

However, I am occasionally capable of small projects if I have help. For example, Dan and I recently installed new porch lights on the house. Here’s the front one. That’s a new mailbox too.

There’s still a ton of stuff to do though. The ultimate goal is to get the house in shape to sell while also making it more livable until we move. The timeline for all of this is virtually non-existent though. Sick people don’t make plans. Our bodies won’t let us do things most of the time. Plus the money thing is always a problem. If you know, you know.

I feel a not insignificant amount of pressure to get the house in good shape to list, despite everything being uncertain and knowing it’s not in our immediate future, just because houses are selling like toilet paper in a pandemic right now. One two doors down from us sold in about 48 hours for a decent price, and I can’t help but be terrified that the SELL NOW bubble is going to pop before we’re ready. I still have nightmares about dumping that shithole condo in Indianapolis. It. took. forEVER.

One really major thing that would be awesome to do is update our main bathroom. It’s all original fixtures, in terrible shape, and far from accessible. I manage, but not with any peace of mind. (Please don’t suggest grants for the disabled unless you have actually applied for one, been awarded the grant, and you are not a veteran of the armed forces. I have a better chance of finding an actual unicorn for sale at Walmart than having anything I need actually covered and I can tell you how I know.)

I’m starting to get grouchy now, so I’ll stop here and go message another oncologist about when chemo is supposed to happen.