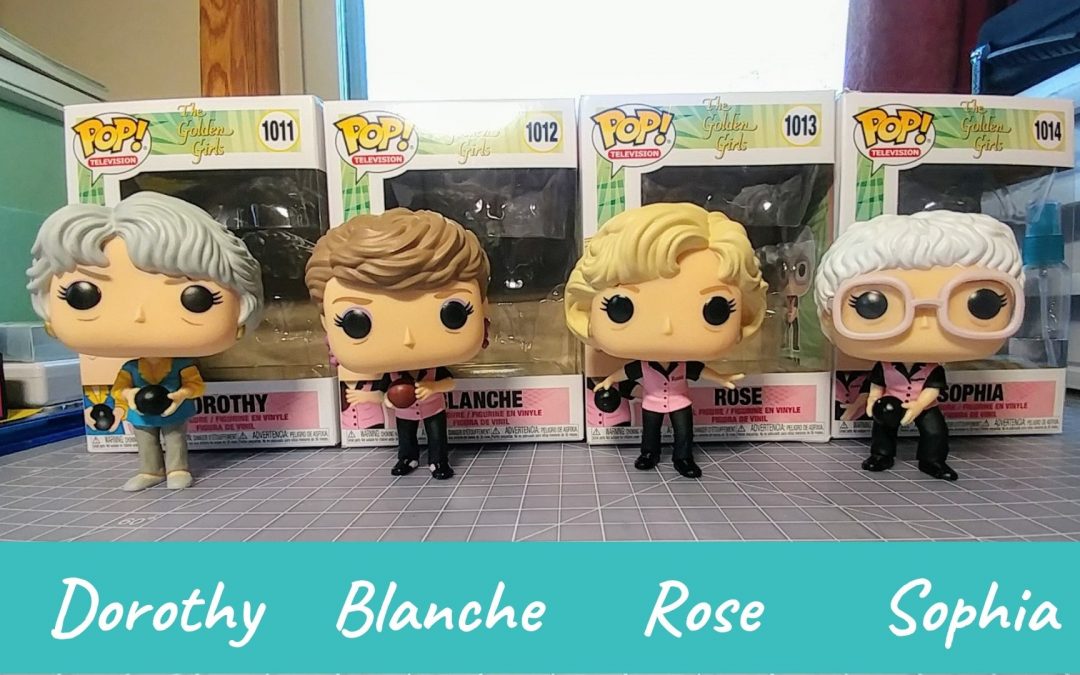 Thank You for Being a Friend

Fun fact: I can sing the entire Golden Girls theme from start to finish.

When Dad died at the end of March, I went to stay with my mom for about a week. Grief kept us wide awake at night and utterly exhausted. So we started watching reruns of The Golden Girls until we just couldn’t keep our eyes open a second longer. Some nights it worked, and some nights it didn’t. But Dorothy, Blanche, Rose, and (especially) Sophia made us laugh when we desperately needed a little break from being sad.

I casually mentioned to Dan that it would be great if Funko Pop! made a Golden Girls set of figures, and he was like, “I’m pretty sure they do.” He sent me a couple of links the next day, and I mentioned on Twitter that it was a good thing he didn’t show them to me the night before when I had taken an edible and was more likely to spend money we didn’t have.

Next thing I know, a Twitter friend was asking for my address. “You deserve a happy,” she told me. And then a couple of days later, I was the proud owner of the Girls in their bowling best. Thanks, Liz!

Look. At. Them. I’ve long admired Funko Pop! figures, but I’ve never been a collector because: cancer. The excessively practical side of me was just like, “Emily, you do not need toys with giant heads. Even if they’re adorable caricatures of your favorite things. Even if they are wearing bowling shirts.

When I was young my parents were on a couples’ bowling league in our small town, and I used to love running around the bowling alley with the other kids, buying candy at the concessions counter, and watching the older kids play video games. There was a point for a little while that my dad was in so many leagues that he was at Posey Lanes four nights a week. When we went through his stuff in the basement, we even found a couple of kitschy plaques and trophies.

Incidentally, my brother sent me the Deadpool Bob Ross Bobblehead Funko a while back, and it was my first and only full-sized Pop! until the Golden Girls arrived. (The keychain version came with the DVD copy of Deadpool 2. At least I think it was Deadpool 2. My memory can be hit or miss.)

I took him out of the box and filmed this short clip just so you all could enjoy the bobble too. It’s delightful!

That’s all I’ve got for you today. Just comforting stuff. I still haven’t heard any more from the doctors about starting Temodar again, but I kind of don’t want to call and ask where we stand on that. It gives me more time to prepare for things financially as well as get some stuff done around the house that needs tending to. If you’d like to help by contributing to my GoFundMe, I am grateful for your help. And if you have already donated or shared the link on social media, thank you for being a friend!