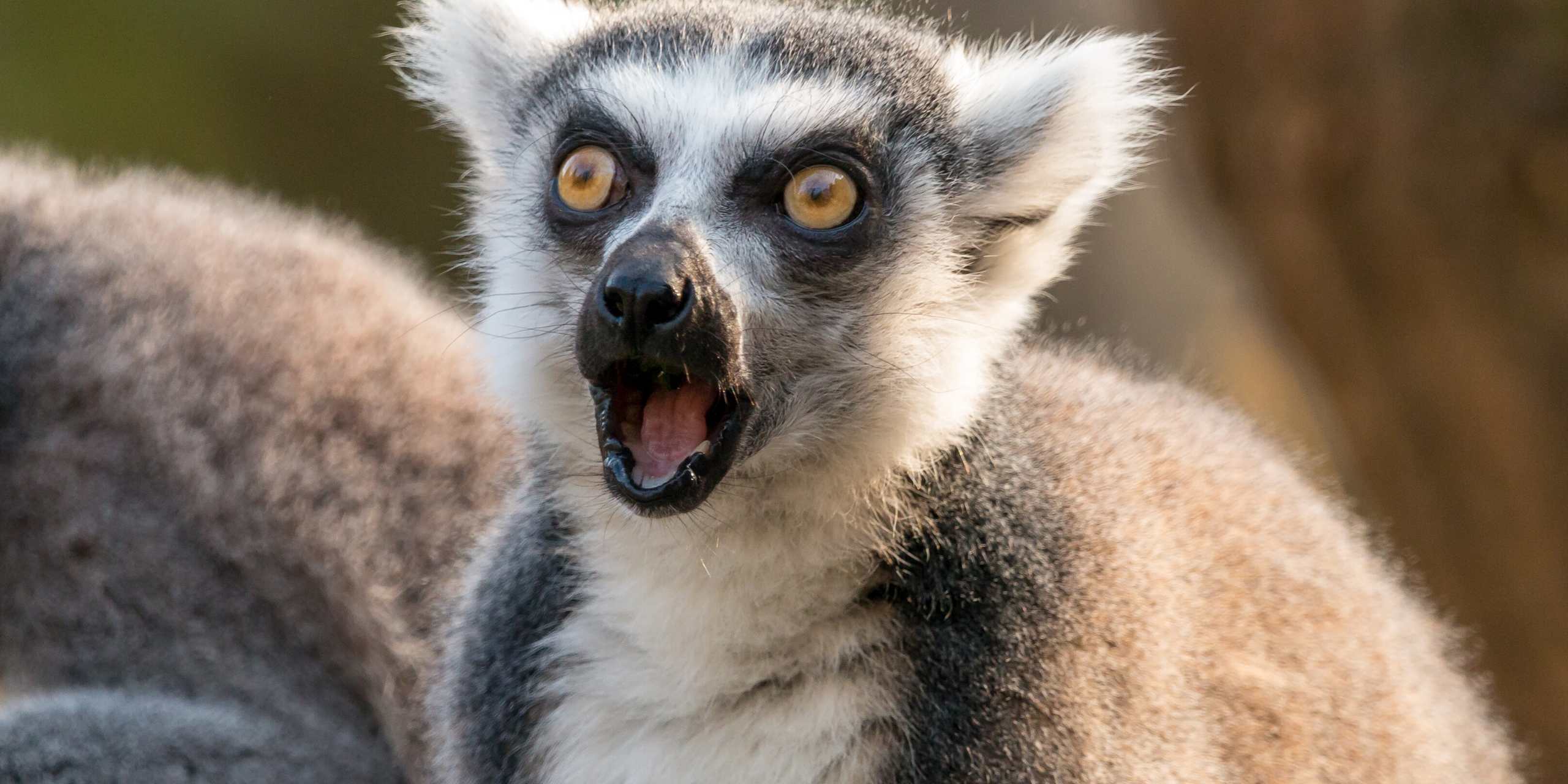 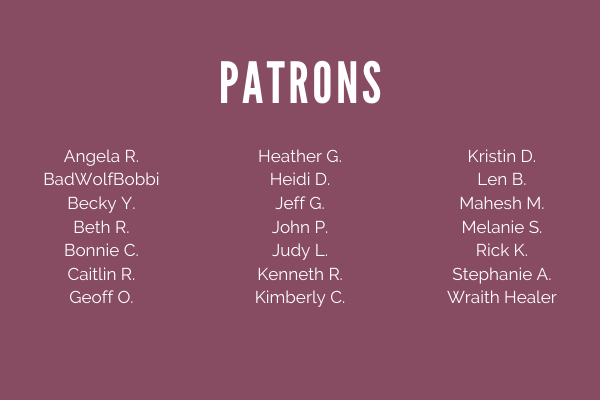 It’s the 30th again, and that means there’s a freshly released chapter of Who You Gonna Believe over on Patreon. Chapter 4 is titled “Liar, Liar”, and this month we reach the part in the story where Rodney, my first husband, confesses to being a compulsive liar. (Yes, of course, he picked after we were married to come clean about that.) I also spill the beans about the night I confronted him for cheating.

Anyway, thanks to my Patrons for supporting this project! Without it, I’d be a right mess. As it is, I already spend way too much time languishing somewhere between “this brain tumor is killing me too fast” and “this brain tumor isn’t killing me fast enough.” (What can I say? Cancer is depressing. Medical bankruptcy doesn’t really help.)

However, knowing that people out there are reading my words gives me a sense of purpose, and I really need that right now. So thank you.

If you’re not a Patron yet but you want to be, it’s pretty simple:

Every time a new chapter of my memoir is released, you’ll be notified. Plus, you’ll see your name in the spotlight with all those other wonderful people when I post next month. 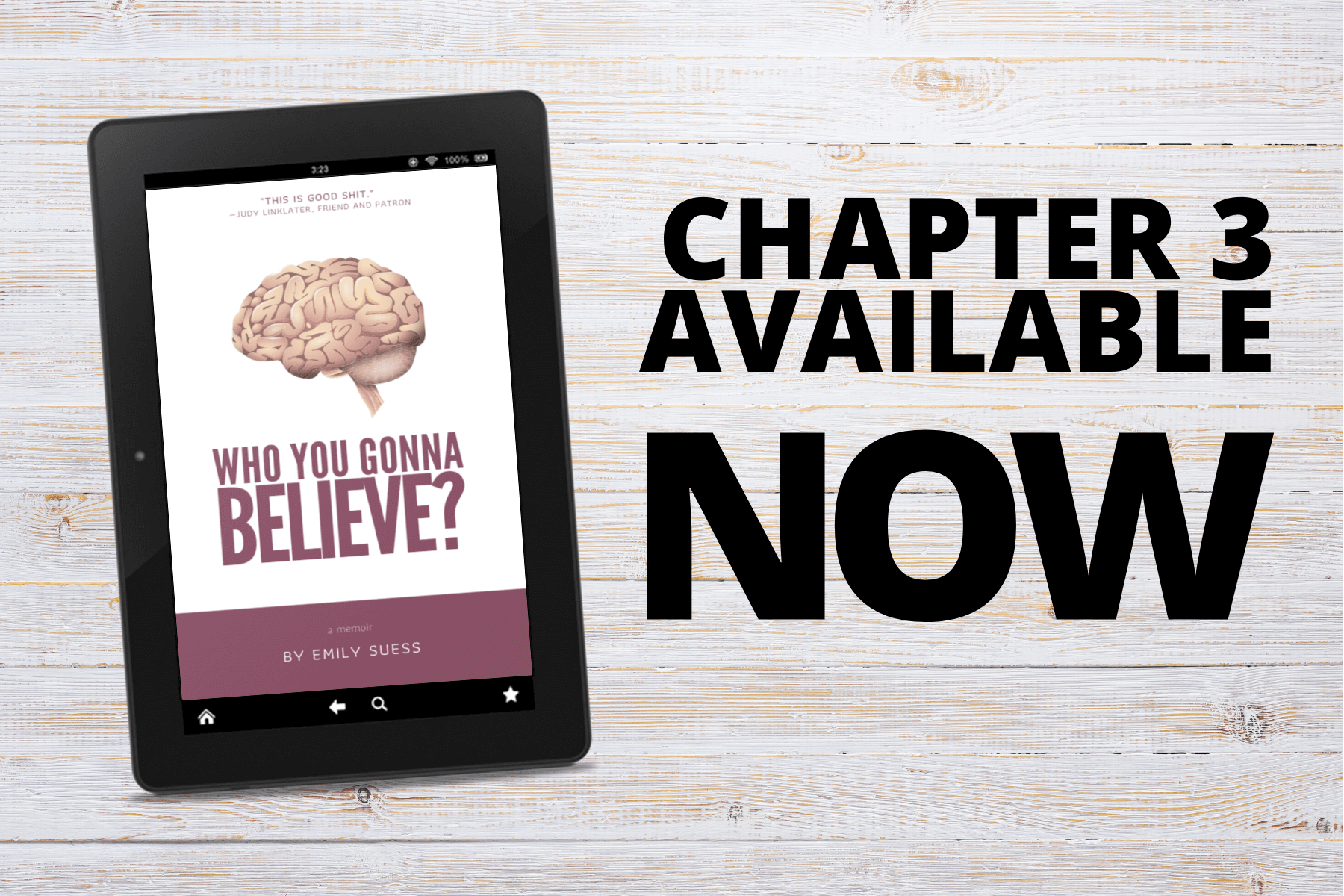 Who You Gonna Believe Chapter 3 Now Available on Patreon

Today I’m saying goodbye to June and hello to another chapter of my serial memoir, Who You Gonna Believe. Chapter 3 is titled “Suicide is Painless,” and though I don’t want to give away spoilers, I will tell you it deals with my mother-in-law’s suicide in 2006. The title may sound flippant, but I assure you it is entirely fitting.

If you’re already a patron, you can read it right away. If you’re not, you’ll need to sign up at patreon.com/EmilySuess.

Not familiar with Patreon? Patreon is a place where writers like me (and artist, musicians, podcasters, etc.) can run a subscription content service. We make things you enjoy; you support those efforts with a monetary pledge of as much or as little as you can afford.

For instance, with just a $1 pledge, you get access to Who You Gonna Believe Chapter 3 as well as all previously published content. (Also, a quick reminder: you can catch a sneak peek her on emilysuess.com if you’d like to try before you buy.)

So hop on over to Patreon to catch the latest installment of my memoir. Don’t forget to share my Patreon page with your friends, because I publish bonus chapters when I hit new goals!

That’s it for now. I’ll have more for in the coming week on the latest developments with my fight against Lincoln Financial Group, for those of you watching to see how that saga is going to unfold.

Until then, have a wonderful Sunday and enjoy Who You Gonna Believe Chapter 3. 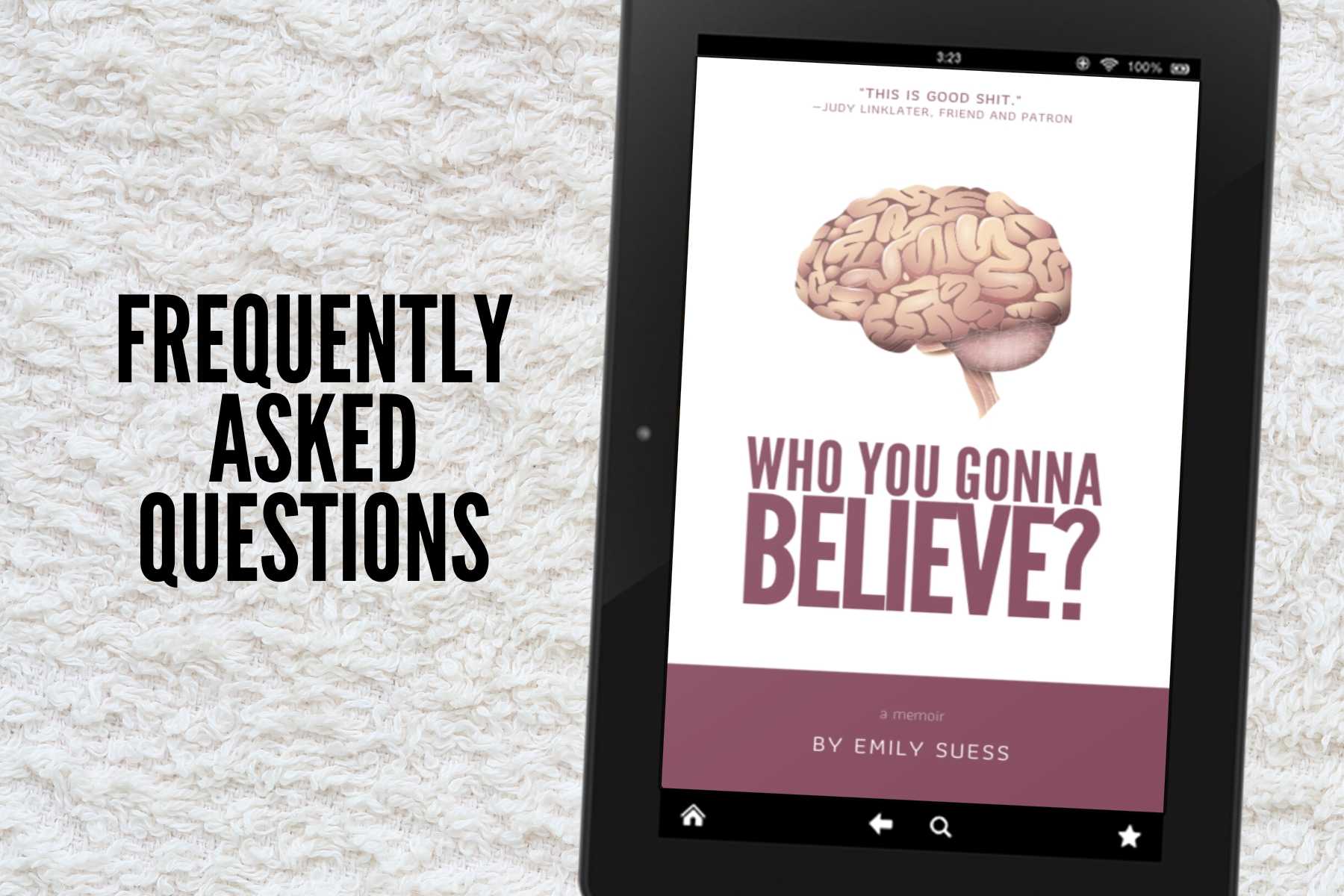 Who You Gonna Believe: FAQs

WHAT IS WHO YOU GONNA BELIEVE?

Who You Gonna Believe is my memoir. It’s covers my eventful life circa 2003 to present and explores the traumas and lessons that come with being married to a self-professed compulsive liar and narcissist. (For the record, I use the word “narcissist” colloquially, not clinically. But I think a case could be made.) Then it takes a look at how those events might have maybe saved my life.

DO YOU NAME NAMES?

No. I’ve changed most of the names and obscured certain identifying details with the sole intent of avoiding being contacted by my ex. (I’m 99% sure he still Googles himself daily, if not hourly.) Of course, people who have known me for years will know who I’m writing about. But in that case, I can’t really further defame a person who’s already publicly defamed himself.

HOW CAN I READ WHO YOU GONNA BELIEVE?

WYGB is being published serially and exclusively for my Patreon Patrons. All chapters are available on Patreon and excerpts may be available on other platforms. Update: As of December 2019, I am working hard to make WYGB available on this website. If you encounter snags here, you can always access content through patreon.com/EmilySuess.

SERIALLY? WHAT DOES THAT EVEN MEAN?

Chapters will be published on a monthly basis at the end of each month or as soon as I reach a new subscriber goal. For example, Chapter 1 is scheduled for release on April 30, 2019. However, if I reach 20 patrons before that date, Chapter 1 will drop early. (See the Goals section on my Patreon page for current release information.) I will make every effort to publish new content 24-48 hours after a goal is reached. However, I’m disabled and have brain cancer and hope you’ll all be understanding if I have to fudge that a little bit once or twice.

I think one subscriber per household is pretty fair considering you can choose what you pay, but if you want to share posts with your grandma in Tallahassee I’m not going to crap a brick. I also won’t be policing who’s paying to read and who’s found a way to read it for free. Hell, if you want to print and distribute copies for your own profit, all I ask is that you be willing to live with the guilt of stealing money from someone with brain cancer. Basically, just do what you think is fair and support me if you can, okay?

CAN I PAY TO READ THE WHOLE THING AT ONCE?

No, but not because I’m a jerk. You can’t read the whole thing at once because I’m not finished with it yet. In an ideal world this could have maybe been an option for readers, but as I mentioned previously, Lincoln Financial Group terminated my disability insurance policy unexpectedly and I had to start releasing the parts that were ready way ahead of schedule.

Then again, in an ideal world I wouldn’t have a diffuse astrocytoma on my brain stem. Just… it’s not an option. Alright? Gosh.

IS THERE A TABLE OF CONTENTS OR SOMETHING?

Yep! These regularly updated links take you to each of the original Patreon posts. 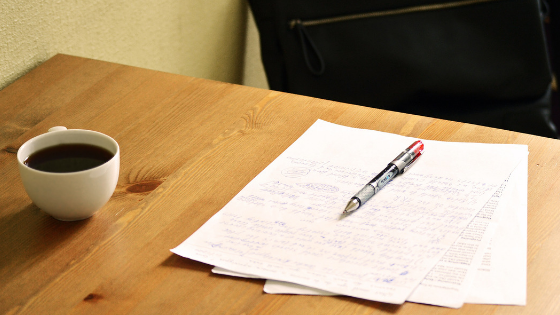