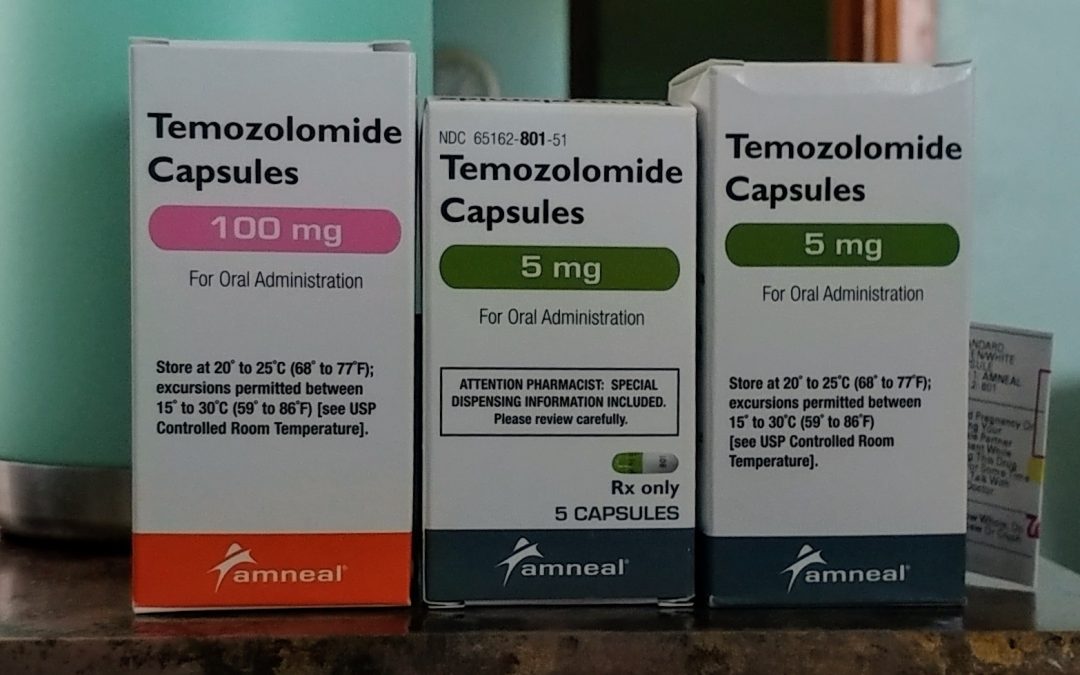 This is what a 28-day regimen of 110 mg total of temozolomide looks like fresh out of the box. Everything will be staying neatly tucked away in its original packaging until it’s time to swallow the pills. There are all kinds of “don’t let this come in contact with your skin or eyes or mucous membranes!” warnings. And somehow I get to reconcile that with the instructions the doctor gives to swallow THREE of them at a time.

Put them in my actual stomach and let them wreak havoc on my GI tract? On purpose? Sure! Sounds great.

Now, I’ve taken this chemo before. In 2017, when I was initially diagnosed, I did a round of temozolomide simultaneously with my radiation. (Chemo Season 1) Then, as adjuvant therapy a couple of weeks later, I went on a jacked up dose of temozolomide. Or, rather, I was supposed to take a jacked up monthly dose for several months.

However, I had a quite serious episode after swallowing that first adjuvant dose. If you’ve been around since that time, you may remember that my body was like, “Fuck this, I’m out” and then Dan rushed me to the emergency room.

(Did I mention when you take chemo in pill form you just do it at home like it’s any other pill? If something goes sideways, you’re just kind of standing in your vomit-coated PJs like, “What the fuck should I do now?)

When I arrived at the hospital, the ER doctors (here in Urbana) didn’t really know what was going on, and when they contacted my former oncologist (in St. Louis) it still wasn’t clear to him either. The gist of the back-and-forth was: “Wow, no one’s ever reacted to treatment like that before! You’re so unique! Which, okay. Fair.

So I had some allergy tests done while the doctors let my body recover. The allergy tests were inconclusive, and they decided to play it safe and prescribe me CCNU (also called gleostine) instead. (Chemo Season 2)

I wouldn’t say I tolerated the CCNU well. I just, you know, did about as well as you’d expect a cancer patient to do on chemo.

All of that recapping of previous chemo seasons is just to set you up for this: I’m currently teetering between “this time will be fine because I’m back to the smaller dose of temozolomide” and “OMG, this shit is going to send me to the ER in the middle of a fucking pandemic.”

Ultimately, the decision to take temozolomide was mine, and I told my oncologist that I was willing to try it again as long as it was at the smaller dose. But that does not mean I’m not periodically freaking out about taking it again.

Monday is my phone “teach” from the chemo nurse at Carle. (It’s usually done in-person, but PANDEMIC! So I am very comfortable not going to the hospital unless it is absolutely necessary.) Monday is when I will find out exactly how and when they want me to take the pills. So in the meantime, these boxes are going to stay tucked away in a cabinet by my bed.

Got $10 and want to help? Here are the ways you can donate: